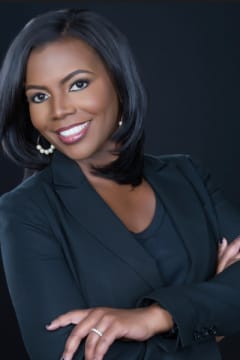 Earlier this summer, the trademark industry lost one of its most beloved members, Dinisa Folmar. Dinisa was an extraordinary attorney whose career spanned serving as a trademark examiner at the USPTO, private practice (including as an associate on my team, the practice that ultimately became Winterfeldt IP Group), and senior in-house roles at The Coca-Cola Company and Nike, ultimately culminating in serving as Global Head of Intellectual Property for The Hershey Company. She also served in numerous industry leadership roles and diversity and inclusion-related activities, including as a champion ally to the LGBTQ+ community. In addition to her professional accomplishments, Dinisa was an extremely dear friend who was a treasured part of my life for nearly two decades, before her passing at the age of 47 following a long illness.

Dinisa had also been appointed to the USPTO’s Trademark Public Advisory Committee for a term that began in 2020, and I was honored to be able to provide a remembrance of her to be shared at the recent TPAC meeting. I would like to share these thoughts with all of you now as well, so that those who did not have the pleasure of knowing her as well as I did may be able to share in the exceptional presence and joy that characterized her short but immensely impactful life.

Dinisa Folmar was the most rare and extraordinary kind of person who truly brightened everything she touched. We all know a good deal about her professional accomplishments – her distinguished career in both private practice and in-house, leading her to become Global Head of IP for Hershey in her final role, and the broad trademark industry footprint that led to her appointment to TPAC for the current term. However, where so many people – especially those who achieve so much at a young age – get where they are by focusing primarily on themselves, Dinisa was tirelessly devoted to the service of others. In all of her professional and industry roles, she always took the time to train and mentor junior team members, and had a keen eye for new talent. I have heard from many people who feel they owe their success in their careers, and in life, to Dinisa’s kind and insightful guidance. In her personal life, she was a devoted daughter, sister, and wife to Winston, who is one of our USPTO colleagues. She maintained lifelong friendships as a member of the Alpha Kappa Alpha sorority. Dinisa had a grand sense of adventure; not only did she love to travel in her leisure time, but she spent several years living abroad in the UAE in connection with one of her in-house roles, and she was eager to embrace any challenge and to encourage those around her to join in and keep up. I know we were only given a short amount of time to serve on TPAC with Dinisa, but I am sure we will all remember her keen insights, her bright smile, her infectious energy and good cheer. While taken from us far too soon, she leaves a most wonderful legacy and example for all who were lucky enough to know her.

I hope that many of you who are reading this may be lucky enough to have your own memories of Dinisa, as a colleague, a friend, or both. While we remain extremely saddened that her time on Earth has come to a close, her legacy will indeed endure in its influence on our approach to our work, and to life itself. May we all Live Like Dinisa.